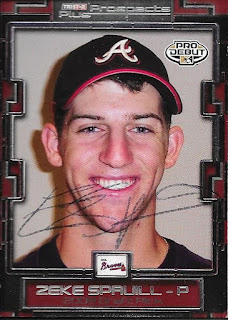 This 2008 Tristar Prospects Plus card was in my prospects box since I pulled it from a pack when it originally came out.  I found an address for him and was able to get the card signed TTM.

The card turned out well, even with the ballpoint pen that Spruill used.  I was really glad to get it signed.

I mailed to Spruill on January 16 and got the card back signed on January 25, for a 9-day TAT.

Posted by William Regenthal at 9:32 PM