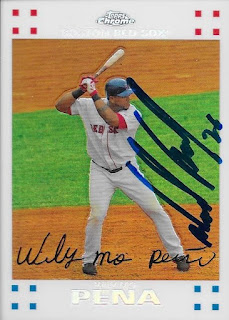 The refractors in 2007 Topps Chrome all look so great; even the base chrome in 2007 was a nice product.  So, when I found two white refractors in one of my boxes that I got from my former LCS of Wily Mo Pena, I was excited to send them off.  I gave the second of the two to my son, Chris.

The cards turned out great, even though Pena signed them up the side.

Posted by William Regenthal at 11:27 PM