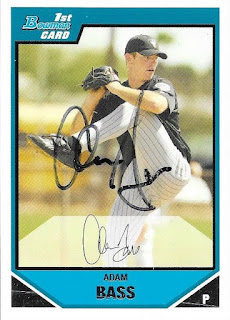 Here's another card that I got out of my Bowman box and sent off for TTM signing.  Adam Bass sent the 2007 Bowman back fairly quickly, but it looks like his Sharpie is dying.  Still, I was glad to move one of my 2007 Bowmans, so I can't complain.

Posted by William Regenthal at 9:23 AM