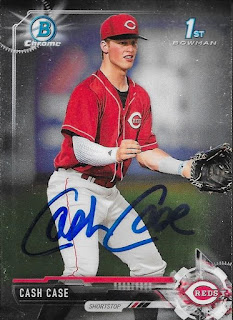 These 2017 Bowman Draft Cash Case cards were passed a bunch of times while I would look through that box.  I wanted to send to him TTM, but didn't take the chance.  I finally sent to him when someone I had been trading with on Instagram provided me with an address.  The cards took a while to get back, but when they did, they looked great. 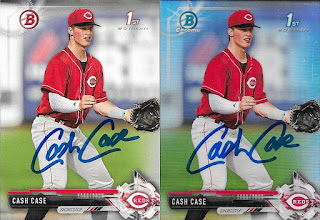 2017 Bowman might be one of my favorite Bowman designs (along with 2014).  This is partly because of the full-card photos, but mainly because that this was the first Bowman set that came out during my first real season of graphing.  I have gotten a lot of 2017 Bowmans signed over the last few years, but the guys who I see that are in the set are tapering off a bit as they mve up the chain, or fall out of the minors.  When I can get some of these signed and reduce my lot of 2017s, I enjoy it.

Posted by William Regenthal at 10:42 AM