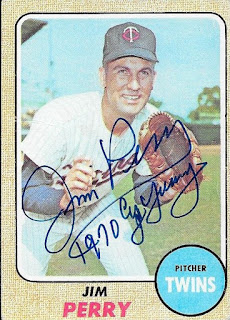 This Jim Perry 1968 Topps was buried in my vintage box, not doing much of anything (I won't start the 1968 set for a while, it seems), so I decided to go ahead and send it off to him TTM.  It came back signed and inscribed with his 1970 Cy Young inscription.  The card looks great, in my opinion.

Posted by William Regenthal at 11:00 PM