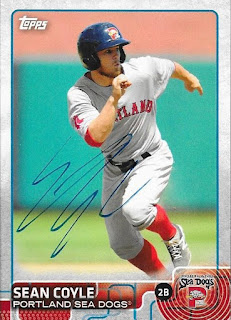 Sean Coyle is another of those players who's name I saw in my boxes bunches of times.  I finally got around to looking for an address for him and sent some of the cards off.  They came back signed not too long later, and I'm glad to get them into my album.
I like the design of 2015 Pro Debut.  I didn't open much of it, but now, Pro Debut is pretty much a staple around here.  They look cool when signed, like the one above.