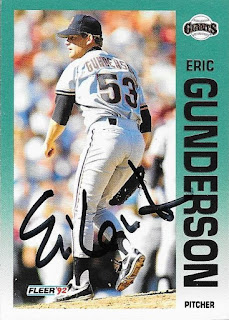 Some cards were removed from my junk wax box when I got this TTM success from Eric Gunderson.  With the boxes and boxes of this stuff that I have, it is hard to get them organized and sorted so I can send to players from this era.  So, I take what I can get, and removing some Gunderson cards helped.

I mailed to Gunderson on November 17 and got the cards back on January 25, for a 69-day TAT.

Posted by William Regenthal at 11:33 AM