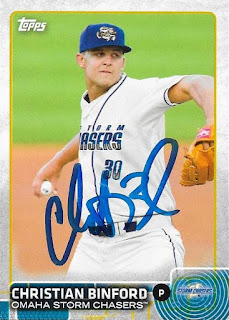 Here are more cards that I was able to get signed TTM that normally would have been taking up space in my prospects box.  I believe I had actually moved these to the Box of Shame, as Christian Binford had been with Bowie, I think.  I'm pretty sure I was set to graph him, but missed him.  Thankfully, I was able to get some of his cards signed anyway.  The above 2015 Topps Pro Debut really turned out great. 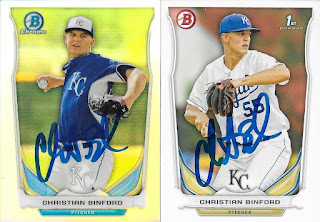 I was really glad to get these two 2014 Bowmans signed, as I had a bunch of them at one time when 14 Bowman first came out.  I got a lot of cards from that set signed, then they kind of plateaued as guys either dropped out of the minors, or made the majors and got tougher to graph.

I mailed to Binford on December 17 and got the cards back on January 25, for a 39-day TAT.