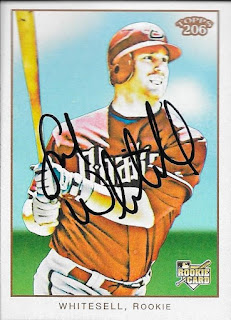 Here are some nice cards that came back signed TTM from Josh Whitesell.  The above 2009 Topps 206 really is a nice card.  I have had a bunch of these that I haven't been able to do much with, so getting this one signed was nice.

I mailed to Whitesell on September 22 and got the cards back on January 28, for a 128-day TAT.

Posted by William Regenthal at 12:19 AM