May 11-16 Graphing Recap of Mudcats at Wood Ducks 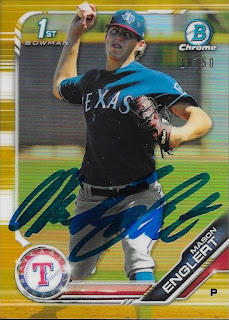 Oh, how I have been waiting for this.  After not graphing at a game since August 2019, I was finally able to do some IP graphing at my home field, Grainger Stadium in Kinston.  COVID restrictions are somewhat easing, and I was able to get a bunch of cards signed that I had been stockpiling for a long time. 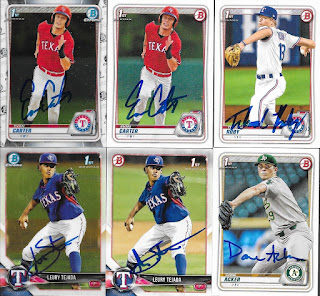 Chris and I hit every game of this 6-game series, and we took 50/50s for a kid on Instagram named Cal (a different Cal than the one I have worked with in the past) and also for my good friend, Jackson. 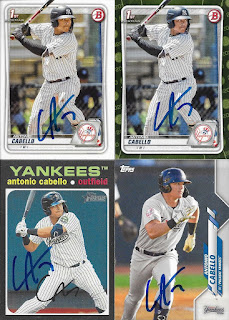 The Wood Ducks were almost strictly no graphs inside, with a couple exceptions.  It has been very confusing, as we have seen that MLB has lifted restrictions, apparently, but here, no one has seemed to get the memo.  Still, we were able to get stuff signed, and we respected the players as we did so.  All were very cool, and they seemed genuinely happy that we were season ticket holders and at every game so far.

Chris made a friend with Wood Ducks pitcher, Mason Englert.  He seems like a great guy, and chatted with us outside after every game.  We also got autographs from Ronald Acuna's brother, Luisangel, on baseballs for my friends, Gerard, Andrew and Jackson.  Chris and I have yet to get Acuna on anything for ourselves.

For the Mudcats, I feel a but guilty, as we racked Caden Lemons.  I happened to have a ton of his cards, but he signed for us each day, and was really cool about it.  He even thanked us for our support, even though we were Wood Ducks fans. 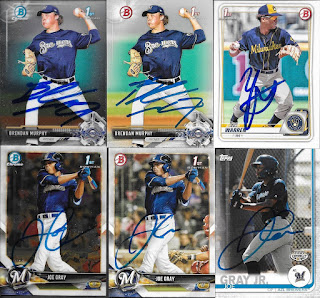 All of the Mudcats players were super nice, and we got a ton of cards signed by them.  A good many of the players had cards to get signed, so it was nice to have options. 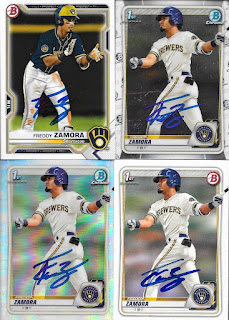 Freddy Zamora was really cool. I talked to him a good bit outside, then again inside later on.  He played the first game, then may have gotten hurt, as he and Micah Bello didn't play the rest of the series.  Zamora represents my first signed 2021 Bowman. 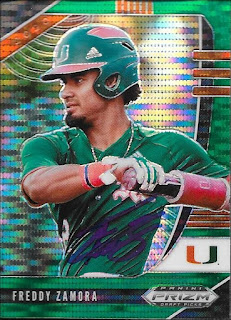 I also got this sweet Panini Prizm signed that I had picked up from a card show a while back.  I ordered 2 more to come in for the next series that they play, since I know someone who is a huge Miami fan.  I know he's still reading this blog, so I guess I'm spoiling a surprise, but oh well.  Zamora promised me that he would sign my other cards when they come in.

Bello was also really nice, even though we talked to him only after the first game. 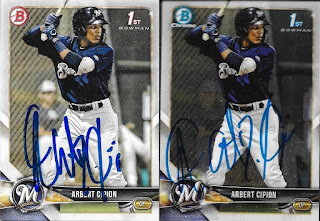 Finally, Arbert Cipion was really cool.  He was only 2-per, but it didn't matter to me.  It turned out that he is from the same town in New Jersey as my mother-in-law, so we talked about that for a while.  He said hey to Chris and I before and after each game, and always smiled.

It felt great to be back in my seats at Grainger Stadium.  I really missed IP graphing, and my hope is that things continue to open up and we get back to normal.

Posted by William Regenthal at 11:48 PM

Don't you have a Mudcats jersey?