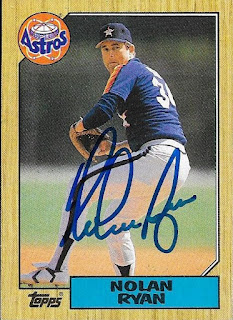 Because I am working on the 1987 set, it was an easy decision on what to send Nolan Ryan when I wanted to get his autograph TTM.  He's expensive, but well worth the price.  I paid $60/card to the Nolan Ryan Foundation but the card came back signed and even had an authentication sticker affixed to the back.