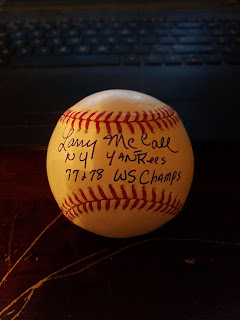 It has been 9 years since I moved from Cornelius to the Greenville area.  One of the few things I hated about leaving was that I was leaving some good neighbors behind.  The couple that lived next door to us, Chris and Heather, were awesome neighbors.  Even though I know Chris still is secretly mad at me for talking him into helping me move a China cabinet into a second-floor bedroom in that house, they have kept in touch with us.

I received a random message from Heather a month or so ago on Facebook asking for my address.  She explained that she has a family friend who played baseball, and told him all about my blog.  She had him sign a baseball for me, and sent it out this way.

It turns out, her family friend is Larry McCall, a former New York Yankee.  The ball is amazing, and was a really nice surprise gift from some really awesome people.

McCall was a member of the 1977 and 1978 World Series Champion Yankees.

Thank you so much for the awesome baseball, Heather!  I really appreciate it!
Posted by William Regenthal at 8:00 AM