I Made A Friend, And He Hooked Me Up With Some Autos 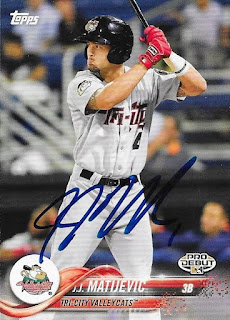 I never did get to Buies Creek this season for a game.  I really wanted to, but never got the chance.  Instead, I went elsewhere and got autos.  During the season, however, I made friends with a few of the graphers who come regularly to Wood Ducks games.  One of them, Ben, also came to the Mudcats while we were there.  The more and more we chatted at games, the more and more we enjoyed ourselves.  At the end of the season, while I was in Kinston catching the Wood Ducks against the Dash, Ben went to Buies Creek.  He was more than willing to take a few cards for me, and hooked me up with a few autos. 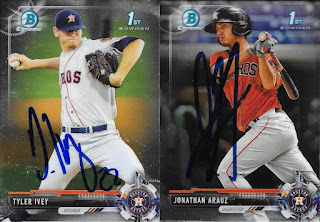 Unfortunately, the game ended early due to rain, so Ben's graphing was limited, but he was able to get me the above cards.  He missed out on JB Bukauskas, since he had been promoted a few days prior.  Still, I was happy with the cards that Ben got done for me.

Thanks so much, Ben!  I can't wait to graph the Wood Ducks with you next season!
Posted by William Regenthal at 9:27 PM