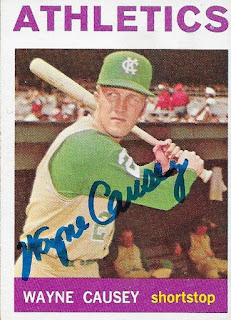 This 1964 Topps signed by Wayne Causey turned out really well.  I had picked the card up back in May when I was in Columbia, and sent it off.  I have finally gotten around to getting it scanned and onto my blog.  I like the old KC A's jersey shown on the card.