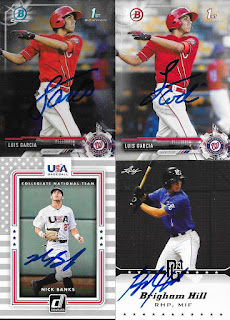 I went on the road a few Saturdays ago to Zebulon, NC to catch the Nationals at Mudcats to polish off a few cards that were left hanging out after both teams finished up with the Wood Ducks.  I had found the one Nick Banks (bottom left) in one of my boxes, and then I saw that Luis Garcia and Brigham Hill had been called up to the Nats.  My son, Chris and my brother, Andy came with me.  We braved some storms, and two bats mating on the field, but we had a great time.  No, there weren't baseball bats mating on the field, they were the flying mammal bats.  It was an odd sight.

Also at this game, I got to talking with a fellow Wood Duck grapher, Ben, his hit it off (even more than we already had).  We ended up graphing a bunch of Wood Ducks games together to close out the season (to be continued).
Posted by William Regenthal at 9:52 PM