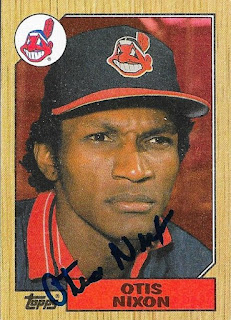 Normally, the private signings I send off to from Sportscollectors.net are counted toward TTM successes.  This one, however, was delivered by hand to a vendor at the National, and I received the card back signed a few weeks later.

Otis Nixon is a pretty tough signature to obtain, so I was very happy to see someone from the Atlanta region hosting a signing for him, and at $10/card.  It made it even easier that the vendor was taking submissions by hand at the show, so I saved a stamp.