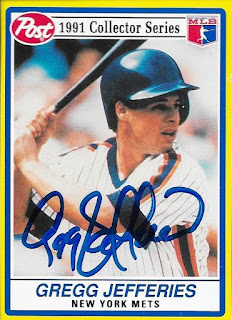 For some reason, extra VIP vouchers for Gregg Jefferies were hard to come by at this year's National, so I was only able to get one card signed.  Out of the huge lot of cards of his that I had, I chose this 1991 Post Cereal card as the one I would get done.  I picked this card because it reminds me of when I first started collecting cards.  I remember getting a few of these and being really excited.  I didn't have any in the album yet, so this one was a good choice.