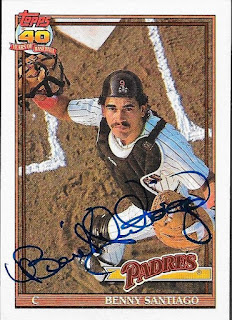 I was really looking forward to meeting Benny Santiago at the National this year, ever since my friend, P. A. reminded me that this 1991 Topps existed.  This is another example of the great photography in this set, and I now have this card in my album.

Santiago was really cool when Nate and I met him.  Nate had the 1997 Fleer of Santiago that we found in a dime box.  That card has a yellow Ferrari or Lamborghini on it and we asked Benny if he still had the car.  He said "I almost died in that car, man."  I asked him how fast he had it up to, and he said "180 man".  It was a pretty awesome exchange, to be honest.

I was really glad to get this card signed, and it helped that my buddy, Gerard had an extra one for me, because I couldn't find any in my collection, without breaking my 1991 Topps set.
Posted by William Regenthal at 7:00 PM