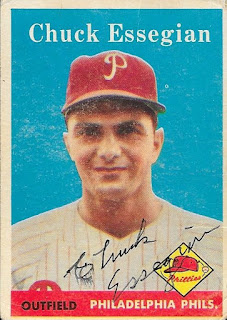 I grabbed a handful of 50s cards from somewhere (it's really bad that I can't remember where I got them) and sent them off TTM.  A few of them came back around the same time, the first of which was this 1958 Topps Chuck Essegian.

The card looks really nice, and was signed with a thin black pen.

His time with the Orioles consisted of one game, in 1961.  He would then be traded to the KC A's for Dick Hall and Dick Williams.

I mailed to Essegian on June 4 and got the card back signed on June 11, for a 7-day TAT.  I guess I raided my vintage box for this, but I definitely can't remember.
Posted by William Regenthal at 9:58 PM