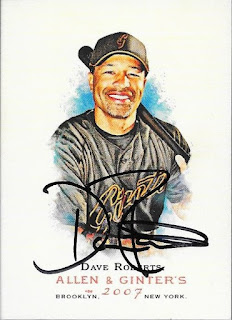 Here are some cool cards that I received signed TTM from Dodgers manager, Dave Roberts.  I had heard he signed, so I sent off a few cards and was glad to get them back.  You can never go wrong with a signed Allen & Ginter. 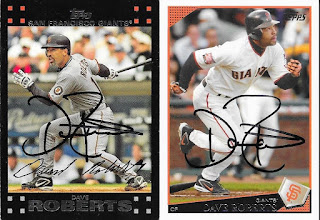 I added a couple Topps cards to my Topps Autograph ledger, and these are two years that are very under-represented.  I need to find some bulk 09 Topps.  I got rid of all of my bulk years ago, but now I regret letting it go since I now use it for TTMs and stuff.

Roberts managed the Padres for one game in 2015, then became the Dodgers manager in 2016.  He led the team to the World Series last year, losing to the Astros.  He holds a career managerial record of 280-198 and won the NL Manager of the Year Award last season.

I mailed to Roberts on February 10 at Spring Training and got the cards back on June 18, for a 128-day TAT.
Posted by William Regenthal at 6:05 PM