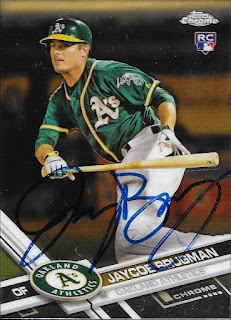 While my friend Jackson and I were waiting around after the Norfolk game we went to a while back, we realized one of the guys we were talking to was a fellow instagrammer.  He goes by the handle "poppadoc" and had won a giveaway I had done a few years ago. 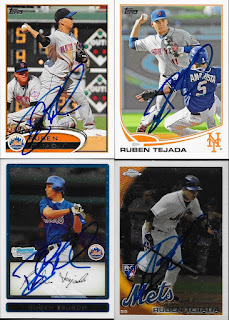 He volunteered to take a few of my cards, since I wasn't sure if I would be able to make it back up to Norfolk before the end of the season.  I was right, I didn't get back up there.

So, I was able to get my Jaycob Brugman and several of my Ruben Tejada cards signed.

The Topps Tejadas will go toward my Topps Autograph Project, of course.  The two chrome were just nice to liberate from my box.
Posted by William Regenthal at 8:00 PM