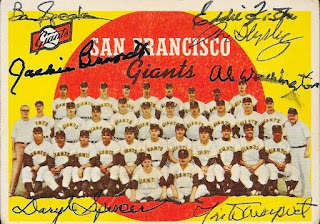 This TTM success from Al Worthington was really interesting in that he swapped out the cards I sent (1964 and 1965 Topps) for the above multi-signed 1959 Topps San Francisco Giants team card.  deceased guys on here, notably Daryl Spencer), so I was amazed that he swapped it out.  There is a possibility that this is someone else's card, but seeing the TTM returns of him, it could also be something he had.  He is known to add extras with TTM requests, and he is also known to lose stuff, so I don't know.  I looked at the list of TTM requests for him on SCN and sportscardforum and didn't see a missing 1959 Giants team card, so I assume he gave it to me on his own. 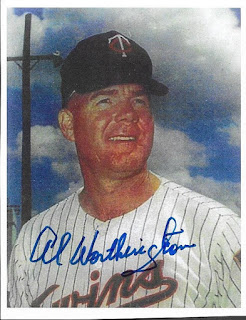 He also included two signed religious tract post cards, which look nice.  He seems to be a great guy, and I really appreciate him going the extra mile to send stuff out.

I mailed to Worthington on May 24 and got the cards back signed on June 7, for a 14-day TAT.
Posted by William Regenthal at 5:42 PM