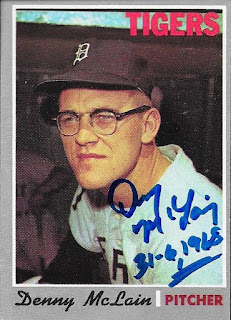 This Denny McLain card was lying around in my collection for a long time.  I believe I bought it by mistake way back when I was working on my 1970 set, but already had it.  Anyway, it was in my card show boxes, and finally, I found it while I was prepping for this year's National.  I knew he would be there signing for a fee, so I decided that this card should make its way into my album, after surviving all of those past card shows.  So, here is it, about to be placed into one of the pages.  He signed for a fee of $35, I believe.  I had set money aside for that purpose, and I always enjoy talking with him.  He is a bit unfiltered, and when discussing pitching with my 12-year old son he says "just throw the f*cking ball".  I thought that was pretty cool.