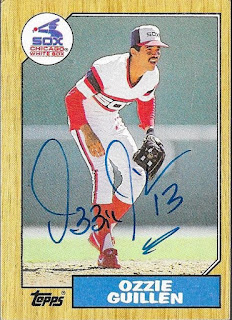 The private signings on SCN really have helped me get a few tougher 1987s out of the way, like this Ozzie Guillen.  I don't know when I would have been able to get him on a card, so this really was my only hope.

Guillen appeared on the 2006 Hall of Fame ballot, but received only 1.0% of the vote.