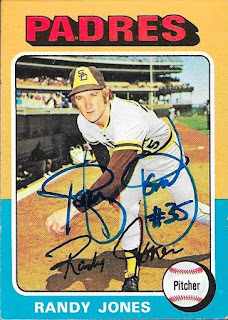 I sent TTM to him over two years ago, and the cards are still out there somewhere, so I was glad to be able to meet Randy Jones at the National and get a card signed.

I had this 1975 Topps in my box, still, so it was the one I decided to get signed.  I believe this one came from my good friend, Max.

Jones appeared on the 1988 Hall of Fame ballot, but received no votes.
Posted by William Regenthal at 10:00 PM