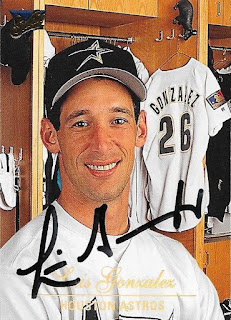 It took quite a long time, but I got these cards back signed from Luis Gonzalez.  He was among the earliest rounds of players I sent to, way back in the day.  I thought these cards were all gone,

Thankfully, I got them all back, and forgot that I sent an extra 1992 Triple Play (that he signed).