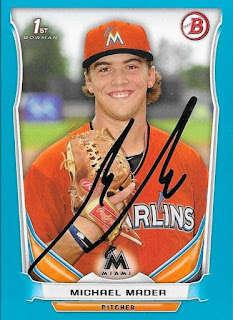 I did fairly well this year with TTMs from prospects and current major leaguers.  I didn't send too many before this year, but now I have gotten quite a few back this season.  I wanted to put a few of my 2014 Bowmans to use, so I sent off these two to Michael Mader via the Mississippi Braves and got them back signed.  The blue parallel is numbered 118/399. 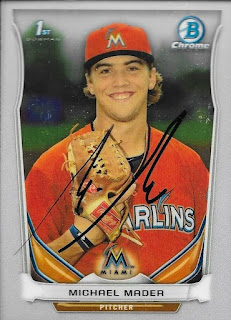 Mader (b. 1994) reached as far as AAA Gwinnett this season in the Braves system.  He did a lot of bouncing back and forth between AA and AAA.  This season he went 7-4 with a 3.71 ERA.  The Braves acquired Mader and outfielder Anfernee Seymour in 2016 for reliever Hunter Cervenka.

Mader was a third round pick by the Marlins in the 2014 June Amateur Draft out of Junior College.