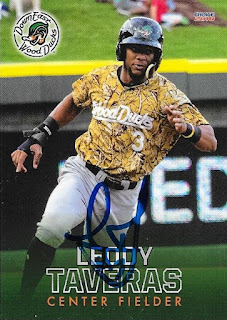 Two weeks ago, the Myrtle Beach Pelicans came to town one last time, and I was able to get a ton of cards signed.  I took a consignment from a girl on Instagram and got s ton of her cards signed, and I also got myself a Wood Ducks team set, and a Carolina League Top Prospects set.  Both of those gave me plenty to do during that series. 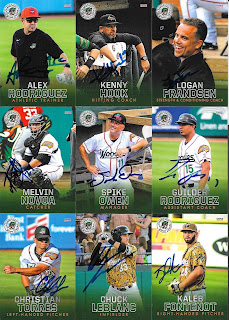 I'll admit, I slowly went through the team set and looked to see if Chris and I appeared on any of the cards.  I didn't see us in them, but that sure would have been cool. 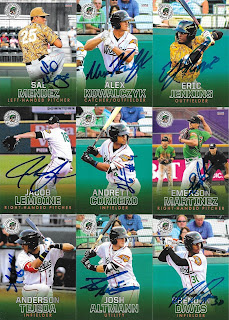 There were a handful of players in the set who had moved up to Frisco, like CD Pelham and Jonathan Hernandez. 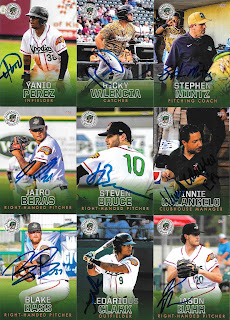 I was really happy that the Wood Ducks issued the set, but it would have been nice if it had come out earlier. 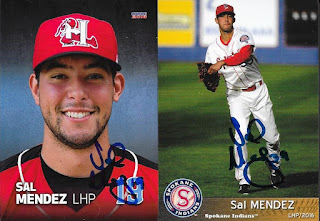 I also worked on my Hickory and Spokane team sets.  I don't harbor any illusions that I'll complete them, they just give me cards of guys who wouldn't normally be available.  It's always nice to have some variety in my graphing book.

I plan to pick up a 2017 and 2018 Spokane set, just so I have some of the guys who will be future Wood Ducks.  Picking those up isn't a top priority now, but I plan to soon. 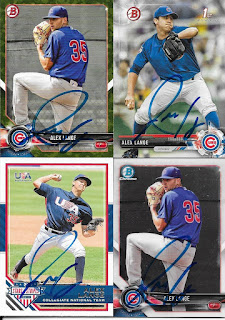 I finished off all of the Alex Lange cards of my own, and all of the 50/50s that I took of him.  I had been worried early in the season that I wouldn't get them all signed, but in the end, I was successful.

There are already a ton of guys in the Carolina League Prospects set that have moved on to Double A, so I'll just take what I can get with these.

Finally, I added a few cards that I picked up at the National.  I was lucky to get Tyler Alamo; I got him on everything Friday night, then he was promoted after the game to Double A Tennessee Smokies.
Posted by William Regenthal at 7:24 AM