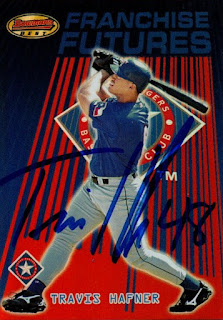 Another card that I found while digging through my boxes was this really cool 2001 Bowmans Best Franchise Futures Travis Hafner.  I added it to my stack of stuff that I really wanted to get signed, and sent it off not too long after.  He signs through PastPros, so I had no problems getting it signed; it was more of waiting until I wanted to pay.  The card turned out great and looks awesome in my album.

I mailed to Hafner via PastPros on October 9 and got the card back on October 22, for a 13-day TAT.

Posted by William Regenthal at 4:32 PM