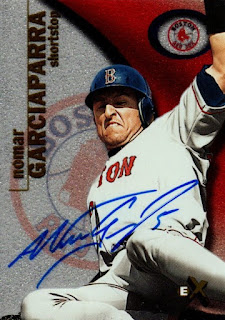 Nomaaaahhh!  He was one of my favorite non-Orioles when I was a teenager, so when I saw a private signing for Nomar Garciaparra pop up, I jumped all over it.  So much so, I couldn't decide on which card to send.  So, I sent three.  The above 2001 Fleer EX is another version of an early 2000s set that I have really come to enjoy.  This card was an easy choice to send, but I didn't find it until after I had pulled several other Nomars that I thought would look cool. 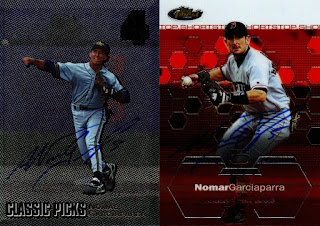 The card on the left is a chrome version of the 1994 Classic 4 Sport card.  I found it at the last minute and included it in the outgoing package to the signing.  The card on the right is a 2003 Topps Finest, and was the original card I picked out of the bunch to send along.  It was in my former LCS boxes with a ton of Red Sox stuff, and I thought it would look really cool in my album.

Posted by William Regenthal at 8:55 PM