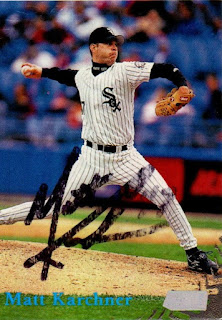 Matt Karchner may need a new marker, or he put this one in the envelope while it was still wet.  Even further, he may have used a dry erase marker on the card, but whichever it is, this card did not turn out well, at all.  Still, it is signed, and it isn't the worst that I've seen (which says a lot).  To be fair, the 1998 Stadium Club cards have a ton of gloss and that also could have contributed to the auto not sticking at all. 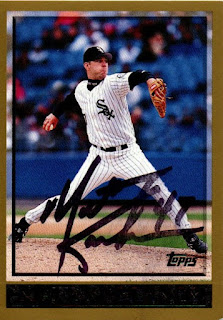 This 1998 Topps looks better, but still shows some of the signs of not sticking like the other one.

I mailed to Karchner on October 19 and got the cards back on October 26, for a 7-day TAT.

Posted by William Regenthal at 3:57 PM