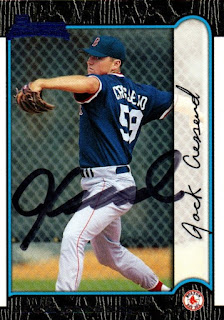 A few more 1999 Bowmans came out of my box recently when I was able to get these three cards signed by Jack Cressend. 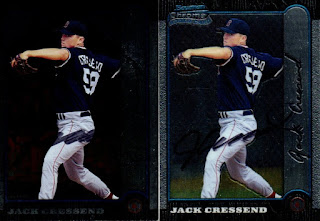 I got a bunch of 1999 and 2000 Bowman cards out of a box from my former LCS, and I have been going through them and trying to get some of them signed.  The chromes all kind of fused together with each other, and got a bit curved, but they are easily separated and didn't sustain much damage at all.  So, I have been able to send off some of them and get them signed.

I mailed to Cressend on October 15 and got the cards back on October 23, for an 8-day TAT.

Posted by William Regenthal at 11:12 PM