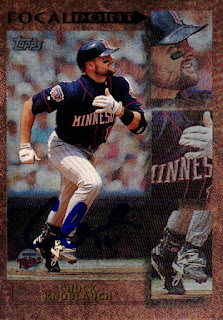 Here is another card that I had found and put aside in a stack of cards that I really wanted to get signed.  This is a 1998 Topps Focal Point featuring Chuck Knoblauch.  I just thought the card looked really cool, and would look nice in my autograph album.  I saw a signing for Knoblauch show up on Facebook, so I went ahead and sent the card in.  I also met Knoblauch at the National and had my photo taken with him, since Michael was unable to use one of his photo passes.

Posted by William Regenthal at 10:00 PM