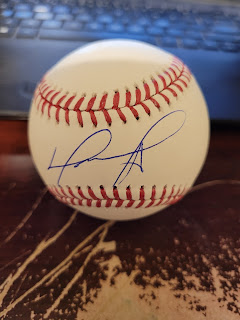 When I went to the National this past year, I was really excited, because I was going to meet David Ortiz.  He ended up having a death in the family, so he wasn't able to attend.  I took the refund from Tristar, but my friend, Kyle, ended up sending off his ball for a later signing.

Kyle ended up getting two baseballs back, so he sold me this one, which has Tristar authentication.  I was really glad to make a deal and still get a ball signed by Ortiz.  I figured that there might be other players I want to see at next year's National, so I would go ahead and cross Ortiz off of my list.

Ortiz will appear on the 2022 Hall of Fame ballot, where he will face off against Alex Rodriguez, among others, who will be appearing on their first ballot.  Ortiz's case is a complex one, with steriod allegations and his career as a DH.

Interestingly, Ortiz was originally signed by the Mariners in 1992, then was sent to Minnesota as a Player to be Named Later in a trade for Dave Hollins.  Ortiz was released by the Twins in December of 2002, only to latch on with the Red Sox and go down in history as one of the players who helped snap the Curse of the Bambino.

Posted by William Regenthal at 8:52 PM