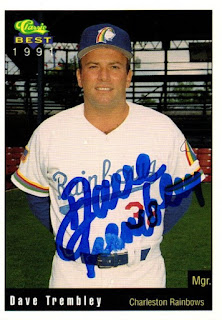 Dave Trembley may not be remembered as the best manager to ever helm the Orioles, but given the teams he was handed, I think he did an admirable job.  We met him back when he was managing the Orioles, and he was one of the nicest guys I've ever met.  I was really sad when he was let go, but he quickly latched on with the Braves.  I finally got around to sending to him TTM, and got some nice cards taken care of.  The above 1991 Classic Best came out of a bargain box my wife bought off of Ebay.  This might have been one of the highlights of the box, and I kept it with my Orioles stuff for over 10 years.  I have finally moved this card to my autograph album, where it should have been kept all along.

I have cards of Orioles managers all in succession in my Orioles box, so Trembley's cards weren't hard to locate.  I got a (from left) 2010 Topps Heritage, 2009 Topps Heritage and 2009 Topps signed. 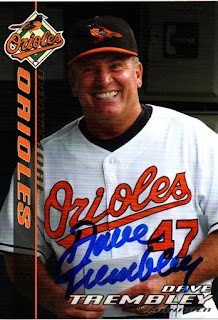 Trembley also included this Orioles post card that he signed.  He also inscribed the back with his tenure as Orioles manager. 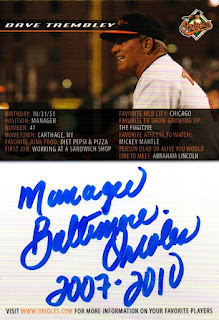 Trembley (b. 1951) managed the Orioles from 2007 to 2010 to a record of 187-283 (.398 win %).  His teams were plagued by a lack of pitching, which seems to be the case most times when talking about the Orioles over the last 10-15 years.  He was dealt a tough hand, and managed with class.  A lot of the Orioles players who would see some success under Buck Showalter broke in under Trembley.

Trembley began managing in the minors in Kinston (I didn't know that, until just now) in 1986.  Back then, they were the unaffiliated Kinston Eagles.  He moved to the Pirates organization from 1987 to 1989.  After a break from managing in 1990, he managed Charleston (in the Padres) organization from 1991 to 1992 and Wichita (also Padres org.) in 1993.  Trembley then spent time in the Cubs organization 1994 to 2002, managing Orlando, Daytona, West Tennessee and Iowa.  His first stop in the Orioles organization was in 2003, when he was tapped to manage AA Bowie.  He spent 2 seasons in Bowie, then 2 at the Orioles then-AAA team in Ottawa, before managing the Orioles in 2007.

I mailed to Trembley on October 12 and got the cards back on October 19, for a 7-day TAT.

Posted by William Regenthal at 10:46 AM

Trembley grew up where I live and I've done newspaper stories on him as well as a blog post or two. Great guy. He was known as one of the most successful minor league managers ever before he got the Orioles job.