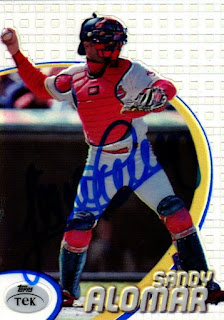 Another example of me finding cards in my boxes that I really wanted to get signed is evident in this TTM success from Sandy Alomar, Jr.   I had him on a 1995 Topps that my friend, Max, got done for me a while back.  Still, when I saw these two cards in my boxes, I put them aside and waited for the next time Alomar popped up in a signing, and off they went.
The above 1998 Topps Tek really turned out amazingly.  I like these acetate cards; I have liked them since they were put into Marvel sets back in the mid 90s.  I'm glad I sent this one off to be signed and had it added to my album. 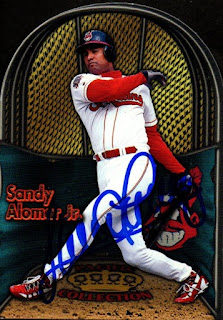 This 1998 Pacific Crown Collection card is really cool.  It is actually laser-cut; the area behind Alomar is some kind of mesh design, and looks really great.  I haven't seen any others from this set, so I definitely wanted to add it to my autograph album.  This card kind of snuck up on me, as far as it being something that I really enjoy having in my collection.