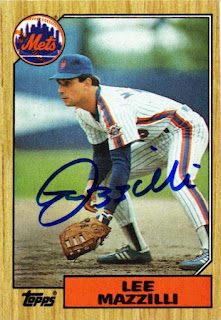 Lee Mazzilli was a tougher autograph to obtain for my 1987 set, but I was patient and waited for a private signing to happen.  One finally did, and I was able to cross Mazzilli off of my needs list.

Mazzilli managed the Orioles from 2004 to 2005 to a record of 129-140 (.480 win %).  The Orioles started out strong during the 2005 season, spending the beginning months of the season in first place.  The wheels fell off in a big way, and by the time Rafael Palmeiro was serving his suspension for a failed steroid test, Mazzilli was on his way out as manager.  I still feel like he got a raw deal and should have been given a longer leash, but that is life as an Oriole fan.