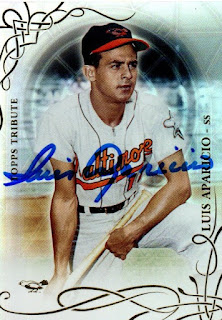 Here is a TTM success from a private signing that I got really excited about.  I had a few Luis Aparicio cards put aside ready to send out, then they got moved around and mistakenly placed into a box.  When this private signing popped up, I freaked out because the cards weren't where I thought they would be.  I tore through a ton of boxes until I finally found this 2015 Topps Tribute (and the other cards I had put aside).  One of the other cards was a Topps Tier One, but that card was damaged a bit, so opted not to send it.  Also, the price point of the signing convinced me not to send in the 1991 Crown Orioles Aparicio. 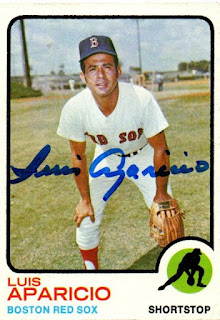 I wanted to send two cards, so my decision was down to this 1973 Topps and a lower grade 1959 Topps.  I went with this 1973, because I thought it looked really nice, and I don't often think of the Red Sox when I think of Aparicio, so I thought it would be something a little different in my album.

Posted by William Regenthal at 10:12 AM