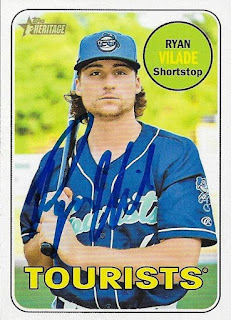 I got my first 2018 Topps Heritage Minors card signd with this success from Ryan Vilade.  The card turned out really well.  I had two of them, and went on to send them both. 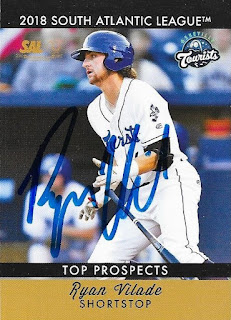 I also was able to get a card signed out of my 2018 South Atlantic League Top Prispects set.

Vilade (b. 1999) was drafted out of an Oklahoma high school in the second round of the 2017 amateur draft by the Rockies.  He has played in two levels of the minors since he was drafted, Rookie League and Single A.  His most recent stop was the Asheville Tourists.  I almost went to Asheville this past summer to see him play, but the timing didn't work out and I didn't go.  It isn't too terribly far from my parents' house, so I may head that way this summer.

I mailed to Vilade on October 22 and got the cards back on November 8, for a 17-day TAT.  In exchange for the autographs, I made a donation to Keeper of the Game, at Vilade's request.
Posted by William Regenthal at 10:31 AM