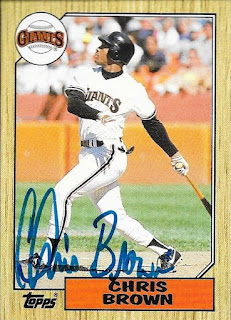 My good friend, Anthony received his Christmas gift recently, and made a nice post on Instagram about it.  Due to the post and his tagging me, a guy named Rocco began following me.  He saw some of the IP autos I had gotten this season, and sent me a DM asking if I would trade.  When it turned out that he had access to his Dad's incomplete signed 1987 Topps set, we went from discussing an actual trade to my buying some of his dad's autos.  I ended up with three tough deceased guys from the set, Chris Brown, Jose Uribe and Dwight Lowry.  I checked each auto with certified ones on Ebay and they all seem to check out, which is great.  Rocco has a ton more signed 87s, so I feel like we will be making a bunch more trades and sales.

After his retirement from baseball, Brown worked in Iraq as an 18-wheel driver for Halliburton.  He took fire on several occasions, including a time when his convoy was attacked resulting in the deaths of six Halliburton drivers and one soldier.  Another driver had been kidnapped and released.  He was able to return home safely from Iraq, only to die as a result of burns suffered during a fire at a vacant house that he owned.  He was 45. 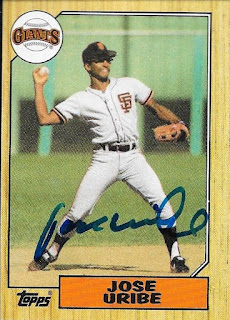 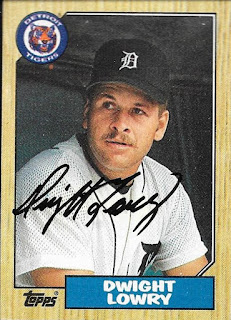 Thanks so much for the deal, Rocco.  These are definitely some tough cards to cross off for my set, but you helped me out tremendously.
Posted by William Regenthal at 10:28 AM