Lots and Lots of Cards From Gerard 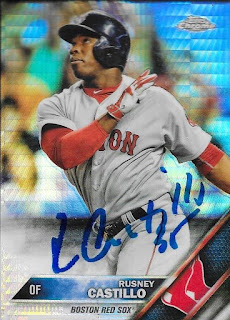 I received a Christmas gift from my friend, Gerard, and realized that I still had a bunch of stuff that he had gotten signed for me that had yet to be scanned.  So, I combined everything into this one post.

He got me a bunch of autos during Pawtucket Red Sox games, and one of the coaches was Rich Gedman.  He had gotten me Gedman's 87 Topps before, and also the above 1987 Red Sox team card.  Still, I'm going to keep this one on hand, in case I am able to get Tom Seaver at some point.  It'll make this easy to find. 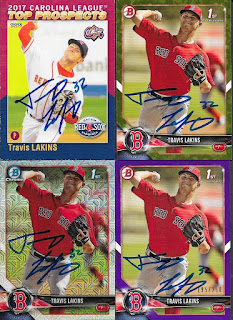 I needed the Carolina League Top Prospects card signed by Travis Lakins.  The other Bowman cards came from the National. 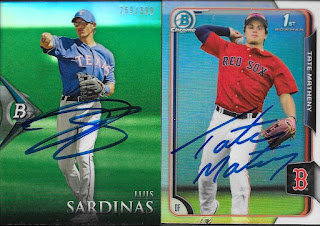 I think I sent this Luis Sardinas card to Gerard because he was going to see Norfolk toward the end of the year.  A lot of the cards he got signed, I gave him in person when we met up in Boston.

Here are some nice Sam Travis cards that he got done.  I'm pretty sure I sent him the 14 Bowman.  The others are probably from the National.

These are some 2017 Topps Update cards that he was able to get done.  Adam Lind is a pretty big sig for me.  I sent to him TTM, but didn't get anything back. 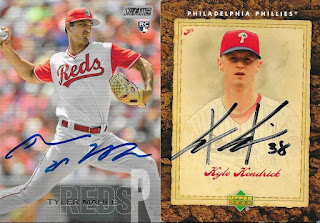 These two are just extra autos he sent along with other packages.  I think he pulled the Tyler Mahle while we were sitting in the park in Boston. 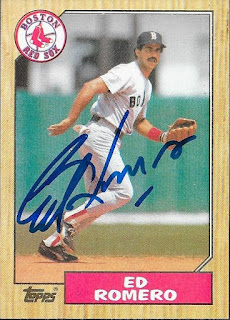 One of the cards he sent for Christmas was this signed 1987 Topps Ed Romero for my set. 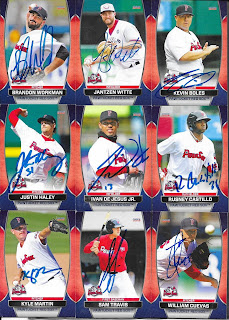 He got me all of these PawSox team cards signed.

There were also some Orioles cards that I can try to get signed at Fan Fest.

I'm pretty sure he found these Nolan Reimolds while he was at a recent card show. 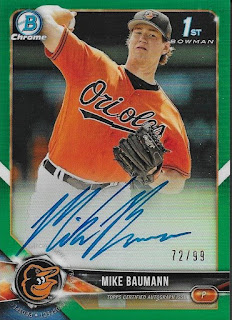 I really liked this 2018 Bowman Mike Baumann auto that he sent.  Baumann was really good for Frederick this season, and is a bright prospect to watch for the Orioles.  He was also really nice when we met him this season. 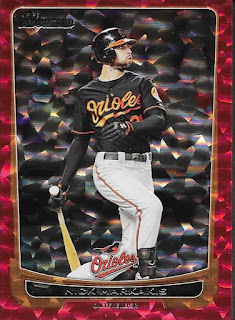 Finally, Gerard knocked this 2012 Bowman Red Ice Nick Markakis off of my wishlist.  Except, my friend Jackson had also bought this cards for me.  Jackson kept telling me this season that he had the card in his card on COMC, but had kept forgetting to send it.  I should have crossed it off of my list, but I also kept forgetting.

Thank you so much for all of the cards, Gerard.  I really appreciate it.
Posted by William Regenthal at 10:12 PM