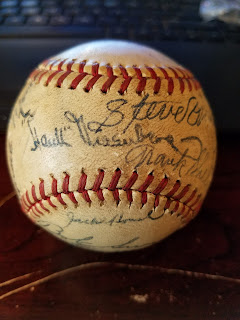 Well now.  My mom really enjoys being able to click on the little "Mom" hashtags at the bottom of my posts (or just search "Mom") and seeing all of the posts that end up being about her.  I'm perfectly ok with this, because it affords me some really cool stuff that she wants to see me write about.

This year's Christmas gift from her was a hige hit for me, as it was this team ball signed by many of the 1946 Tigers.  In the top photo, on the sweet spot, you see that I now own two baseballs signed by the legendary Hall of Famer, Hank Greenberg.  Wow.  Also on the sweet spot are Steve O'Neill (manager) and Frank Shellenback (coach).

I have already profiled Greenberg, which you can read here. 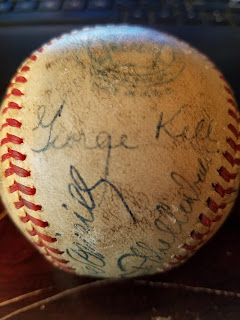 Hall of Famer, George Kell has a very nice signature on this baseball.  He joined the Tigers in May of 1946 for Barney McCoskey.  That means the ball was signed after May 18, 1946.  I profiled Kell on a former blog that no longer exists.  Oops.  I'm going to have to fix that. 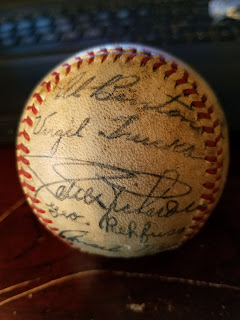 Mom wasn't even aware that Virgil Trucks makes an appearance on this baseball, as the second signature on this side panel.  Also on this panel are Al Benton, Paul Richards, a signature that looks like George Rehfuss (but I can't find that name anywhere) and Anse Moore.

Trucks has been profiled on here more times than anyone else, so just search his name in the sidebar. 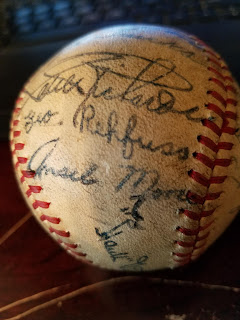 Here is a better shot of the signature that I think is George Rehfuss.  If anyone can identify him, please let me know. 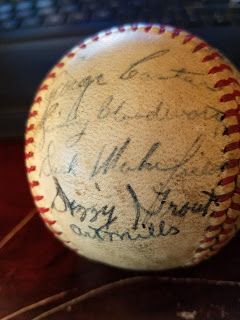 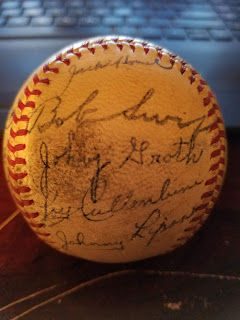 The signature at the top of this panel is one I haven't been able to identify at all.  I thought it said Jack something, but I can't figure it out.  The rest of the signatures are Bob Swift, Johnny Groth, Roy Cullenbine and Johnny Lipon.

Groth is the only living player who is on this baseball, and was profiled here.  He signs TTM.  I may get a few pictures of the unidentified signatures and see if he can help at all.

So, I got 17 of the 19 names for sure.  My guess is the other two guys may be clubbies or someone else.  We'll see what I can figure out.

Thanks so much for the ball, Mom.  You always know how to surprise me. This ball was pretty amazing.  I'm glad I was able to identify and profile so many of the names on the ball.
Posted by William Regenthal at 10:54 PM