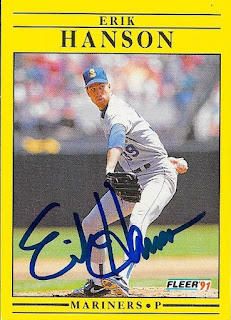 Some 90s cards got signed during this TTM success from former pitcher, Erik Hanson.  I had a ton of his cards, and narrowed it down to just three, and ended up with some pretty nice autos.

I had a ton of 1991 Fleer in a box in a closet.  They were unopened packs from back then, and I figured I would go ahead and open them.  They look really nice when signed.  I know a lot of people who don't like the yellow borders, but they really aren't that bad. 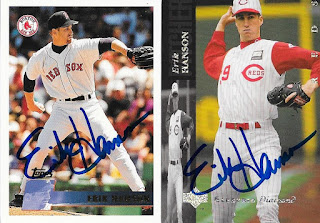 I mailed to Hanson on October 3 and got the cards back on November 14, for a 42-day TAT.
Posted by William Regenthal at 1:42 PM