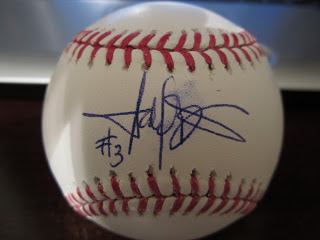 All I had to do today to add a new baseball to my Hall of Fame collection was tune into MLB Network and watch the results of the Today's Era Committee vote.  I was surprised to see that both Harold Baines and Lee Smith were elected by the committee to be enshrined in Cooperstown.  I'm really excited to see that Baines made it.  He had a very long career, and some of his numbers were hurt when he was traded away from the White Sox into a part-time role with the Orioles late in his career.  Otherwise, he might have made 3,000 hits, which would have had him enshrined a lot earlier.

Baines becomes my 142nd Hall of Famer on a baseball.

Baines did not receive much support on the Hall of Fame ballot by the BBWAA.  He only appeared on 5 ballots, and received a maximum of 6.1% of the vote (2010).  In his defense, he appeared on some bloated ballots back then, and finally can say that he is a Hall of Famer.

In the all-time rankings, he ranks 46th in hits, 65th in home runs and 20th in games played.  He holds a 38.7 career WAR, if that stat means something to you.

Baines spent 7 seasons in Baltimore where he had 638 hits, 107 home runs and a .301 average.  My money is on him being inducted as a member of the White Sox, however.  I'll have to continue to wait for a new Oriole to be inducted.
Posted by William Regenthal at 8:42 PM