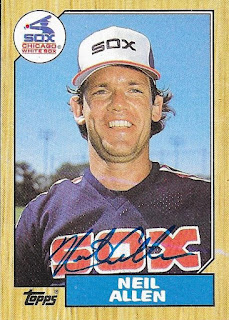 Another private signing on SCN landed me this card for my 1987 set.  This Neil Allen card turned out really nicely.  As of the TTMs that came in yesterday, I am at 361 total cards for my set.  I'm really knocking them out.  I know it'll slow down sometime soon, but I really hope to be over 400 in the coming months.