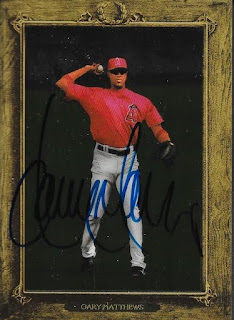 I was really excited when this TTM success from Gary Matthews, Jr. came in because I wasn't sure that it would.  I had to ask a friend for his Harvey book, because Matthews's address wasn't shown anywhere.  The address he hoked me up with worked, and I got a few really cool cards to show for it.

The above 2007 Turkey Red Chrome was my favorite of the bunch.  I prepped the card before I mailed, and that really made it pop.  Matthews has a nice auto that shows up really well on this card. 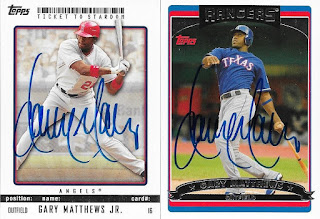 The Ticket To Stardom (left) card will be a first for my autograph album.  It looks really nice.  That wasn't the greatest of all sets, but it also wasn't terrible either.  I also don't have many cards from that set left over, so this may end up being the only one that gets signed for my album.

I mailed to Matthews on February 5 and got the cards back on October 18, for a 255-day TAT.
Posted by William Regenthal at 9:18 AM