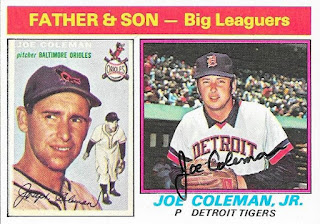 I got some nice vintage cards signed in this TTM success from Joe Coleman.  The above 1977 Topps father/son card turned out really well.  Topps has done this a couple times, and the cards are always nice.  I have gotten a few signed.  I think I have only finished two of them, though, the 1985 Schofield and Skinner.

I mailed to Coleman on October 25 and got the cards back on November 10, for a 16-day TAT.
Posted by William Regenthal at 10:49 AM