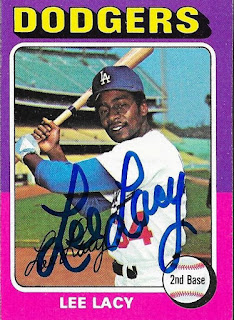 I needed Lee Lacy for my 1987 set, so I finally got around to sending to him via PastPros.  I had a bunch of other cards that I wanted to send, so I went ahead and sent them all.  This 1975 Topps came out of one of the first deals I made with Max a while ago.

I really liked the colors on his 1976 Topps, and also that his 1988 was an Orioles cards, so that's why I sent those along as well.