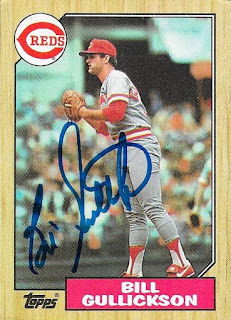 I had his cards set aside for a long time, but I finally got a TTM success from Bill Gullickson.  I definitely needed him for my set, and was able to get the card crossed off of my list.

I mailed to Gullickson on October 22 and got the cards back on November 8 for a 17-day TAT.  I paid his fee of $5/card.
Posted by William Regenthal at 7:02 PM