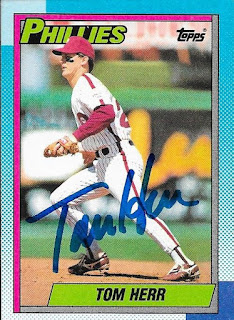 I have his autograph; it was among the first that I ever pulled from a pack.  However, I needed to get Tommy Herr's autograph via TTM so that I could, you guessed it, add it to my 1987 set.  Herr signs multiples, so I added several other Topps issues to the request, and came away very happy.

The above 1990 Topps looked really nice, once it was signed.

I mailed to Herr on October 22 and got the cards back on October 30, for an 8-day TAT.
Posted by William Regenthal at 8:54 PM